You build (spawn) units called creeps the same way as in other strategy games, but with one exception: you construct the "body" of a new creep out of 7 available body part types, the resulting body being a sequence up to 50 parts. It allows thousands of creep types and their roles: ordinary workers, huge construction machines able to build or repair a structure within a few cycles, weaselly couriers, heavy capacious trucks, fast and cheap scouts, well-equipped fighters with regeneration ability, etc. It may even be creeps resembling towers or fortresses for mining, defending, or seizing, with very little speed (couple of tiles per minute), but monstrous characteristics. Everything is up to you, your tactics and imagination. 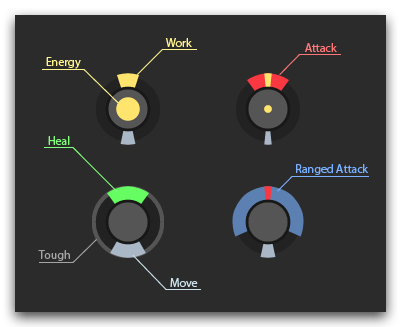 However, remember that any creep has a life cycle of 1500 game ticks (approx. 30-60 minutes depending on the tick duration). Then it "ages" and dies. So you not only need to control existing creeps but set up manufacturing and automatic control of superseding generations of your creeps as well.

A standard spawn (structure) can only spawn regular creeps with the total cost of up to 300 energy units. Spawning more expensive creeps requires a spawn extension in the room. Each extension can contain up to 50 extra energy units that may be spent on creation of a creep. The exact location of extensions within a room does not matter, but they should be in the same room with the spawn (one extension can be used by several spawns). All the necessary energy should be in the spawn and extensions in the beginning of the creep creation.

The amount of extensions available for construction depends on the Room Controller in the room. Read more in Global control.

The effectiveness of an ability depends on the amount of parts of a corresponding type. For example, a worker creep with 3 parts of the WORK type will work 3 times as effectively as a creep with only 1 WORKpart. The same applies to all the other types and actions.

To maintain the maximum movement speed of 1 square per tick, a creep needs to have as many MOVE parts as all the other parts of its body combined.

In other words, one MOVE part can move one other part one square per tick. If a creep has less MOVE parts, its movement will be proportionally slowed which is seen by the increasing fatigue.

It's worth noting that empty CARRY parts don't generate fatigue.

The total amount of hits a creep has depends of the amount of its body parts – 100 hits per each part. The order in which the parts were specified during the spawning of a creep also has a bearing. Under attack, the first parts to take hits are those specified first. Full damage to a part leads to complete disabling of it – the creep can no longer perform this function.